In many small embedded systems it doesn’t make much sense to have a powerful Relational Data Base Management System (RDBMS) such as MySQL because there is only one application that access the database or one that writes and one/many that reads. In these cases, the best option is SQLite that is may be the widest used embedded database.

However, small systems are getting more complex and even when there are only few MB of memory and few MHz (in my case 64MB and 210MHz respectively), there could be several applications accessing the database simultaneously. For example, several C programs writting and several PHP script reading and writting (through a built-in web server such as Busybox’s httpd or lighttpd).
In these cases SQLite starts to have issues handling the concurrence even if you configure it for using Write-Ahead-Log (WAL) instead of the default rollback journal.

I was curious about the minimum requirements I would need to run MySQL in an small embedded system just to see if it was technically feasible. I gave it a try and I managed to run it in an ARM Atmel AT91SAM9260 with only 64MB.
In fact, MySQL was running exactly in 13.58MB: 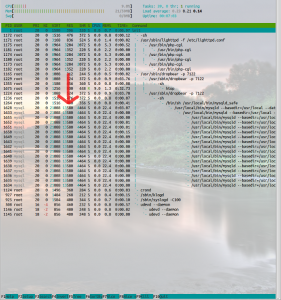 The first thing was obviously building MySQL for my ARM processor. I didn’t find any easy method, but this procedure worked for me. It’s based on this guide written by nonoo.

The most imporant thing when cross-building MySQL is that you have to build first a native MySQL and then cross-build MySQL for your target. This is necessary because MySQL, for building some pieces of itself, it uses binaries generated on-the-fly.

Configure, build and install the only requirement:

Compile the host version. In my case I have an AMD 64 bits processor. Choose the one that fits your host:

Now we can start to cross-build MySQL:

Create and run the script mysql-src-arm/BUILD/doconfig:

The above script copies a couple of files before building. THis is needed everytime because MySQL will try to run the auto-generated binaries for ARM, but we need to execute them in our host (x86). Not doing this gives these errors:

Copy the following ncurses include files generated when building ncurses inside the client/ directory, otherwise the building process won’t find them:

and edit the file mysql.cc by modifying how the above files are included:

Run domake. If you’re lucky it will finish successfully at the first try.

If you have the following error

If you still have problems and get this error:

At this point you should have built it successfully.

It will install in the usr/local/ directory inside the $ROOTFS.

and create the required directory

Now that you have the MySQL server binary in your rootfs you can execute it, but if you have less than 128MB, it will refuse to start.

You need to configure it properly (my.conf) to use as less memory as possible. I made several tests and the best configuration in which I managed to make it work is the following:

Some of the parameters have hard-coded minimums and MySQL will refuse to start if you set a smaller number or simply ignore it and start with it’s default.

Notice that some of these options reduced significantly its functionality. For example, I was not interested in a TCP/IP server, everything runs inside the embedded device, so I set the skip-networking option.

Play around with the different options to fit your needs.

With this configuration I was able to run MySQL and to have several clients connected writing and reading simultaneously without any memory issues. Even the processor behave nicely when there were only few simultaneous writes and reads.

Iconic One Theme | Powered by Wordpress